I caught a little bit of flack earlier this year (and not just the playful kind from my girlfriend) over my insistence to NOT see Ocean’s 8. I stand by my decision, and I still allow for the possibility of seeing it if I am given a compelling reason. Basically, my choice boiled down to three simple facts. One, it’s a reboot/sequel to a remake, which violates my personal rules. Two, it’s yet another bit of the, “Hey, let’s do it with ladies this time!” spin that has yet to produce an actual good movie. Just because you flip the gender dynamics of a franchise doesn’t mean you’ve actually come up with a compelling story. Third, even if I wanted to see it, the trailers told me (and a plot summation online confirmed) that there was no actual motivation for this heist, just Sandra Bullock “wanting to.” She was a criminal, got caught, went to jail, and her first inclination when she gets out is to go right back to being a crook, with a shoehorned revenge subplot in there because reasons. But really, she just wants to do her thing, get rich, and get away with it. I’m supposed to root for her, or any of her cohorts, why, exactly?

Well thankfully, we have a real heist film, with a real cast not just there to draw star power, and a filmmaker who knows how to craft a story. Directed by Oscar-winner Steve McQueen (12 Years a Slave) and co-written by McQueen and Gone Girl author Gillian Flynn, we have Widows, adapted from the 80s TV series produced by the late, great Verity Lambert (the original Producer of Doctor Who), a wonderfully gripping heist thriller that not only keeps you guessing, but keeps you invested in the characters.

From the opening sequence I was hooked, as McQueen spends the first few minutes firmly establishing eight distinct characters, and then kills half of them. Four married couples are shown with alternating views into their home and work lives, both for the men and the women. Harry and Veronica Rawlings (Liam Neeson and Viola Davis, respectively) live in a posh area of Chicago and seem very much in love with each other (complete with some uncomfortable looking make-out sessions). Linda Perelli (Michelle Rodriguez) is an entrepreneuse running a shop and trying to make ends meet while raising her children and dealing with her compulsive gambler husband Carlos (Manuel Garcia-Rulfo). Alice Gunner (Elizabeth Debicki) is physically abused by her husband Florek (Jon Bernthal), but she takes it as the cost of living as a “kept woman,” and she at least finds it better than living with her physically AND emotionally abusive mother (Jacki Weaver). Finally, there’s Jimmy and Amanda Nunn (Coburn Goss and Carrie Coon), parents to a newborn son who live in a small apartment, but seem to get along fine.

The opening rotates between scenes of the domestic lives these four couples lead and a botched robbery job. Harry is the ring leader of a heist gang and the other three husbands are his crew. After being chased by the people they robbed as well as the Chicago police, it appears that they’re going to get away (even though one has a gunshot wound), until their final escape is ambushed and their getaway van destroyed with all inside. This may seem like a spoiler, but the film is called Widows after all. Obviously the hubbies got to go or there’s no movie. But even with that knowledge, the care with which all eight characters are established before the inevitable demise of half of them shows how well McQueen and Gillian are at crafting a story and giving characters their motivations.

While all of this is going down, there’s another battle waging, this one political. The crime boss Harry stole from, Jamal Manning (Brian Tyree Henry), is attempting to put a legitimate face on his organization by running for Alderman of his city’s Ward, which is a fancy way of saying he’s running for City Council. If it seems odd for me to explain that, the film does it as well, in the form of Tom Mulligan (Robert Duvall), the retiring incumbent who is trying to get his son Jack (Colin Farrell) elected to succeed him. Jack means well, but lives in his father’s racist shadow, and as such is open to shady dealings to get himself into office with hopes of eventually becoming Mayor. Jamal walks a delicate line between his public persona, his personal illicit dealings, and keeping his brother/enforcer Jatemme (a very intimidating Daniel Kaluuya) in line.

Harry had never made a move against Jamal before, and with him and his crew dead, Jamal sets his sights on Veronica. He accosts her at their home and demands that she find a way to repay the two million dollars that Harry stole (and which burned up in the explosion that took out the crew). All Harry left behind was a very loyal dog and a notebook, which detailed his next job, valued at five million. Seeing no other options, Veronica and the family chauffeur Bash (Garret Dillahunt) reach out to the other widows to pull off this job, pay off Veronica’s debt (which really falls to all of them, as Jamal will go after them next if Veronica can’t/won’t pay up), and use the rest to help them rebuild their lives, as Linda has lost her shop, Alice has been forced to move back in with her mom and become an escort, and Amanda is home with a newborn. 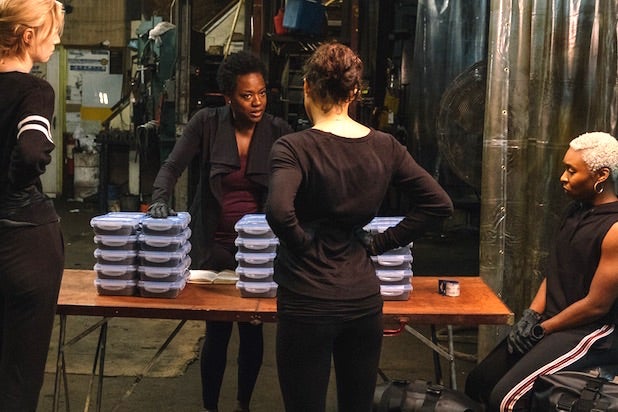 Right there, we have a much more compelling reason for a heist than anything in the “Ocean’s” franchise, not just the half-assed lady version. There’s no avarice, no fake friendships, no silly desire for riches for riches’ sake, no “cheap thrills.” They all have a need for the money. They all have a need for each other, even though it’s made clear that none of them really like each other. They all begin this process with basically no idea how to pull it off, as they intentionally stayed out of their husbands’ business. They all have personal stakes in the success of the mission, except for Amanda, who is too busy with her baby and other personal matters to participate, though she still has a great role to play in the larger story. Her role in the makeshift crew is filled by Cynthia Erivo (Bad Times at the El Royale) as Linda’s babysitter Belle, who works two jobs to make ends meet for her own child, and could certainly use the boost. Belle’s day job is at a beauty salon which was funded through business grants from Jack Mulligan, so without knowing it, she’s just as connected as the others to everything else going on.

With a firmly believable set of characters and a compelling plot, McQueen is then able to create some seriously amazing visuals. Like his previous work, he likes to deal in long, unbroken shots. Sometimes it’s a drawn out sequence, and other times it’s just a matter of leaving a static shot on someone’s face just a little longer than we’d normally expect, just enough to let us empathize that much more.

There are a couple of truly brilliant sequences in this vein. Two of Jamal’s lackeys – among those responsible for the lost money – are discovered in a locker room laundry bin rapping. They’re brought out into a gymnasium area where in a single shot, Jatemme forces them to perform as the camera spins around them a few times. It’s legitimately creepy and shocking. It’s similar in form to the scene from 12 Years a Slave where Lupita Nyong’o is tied to the whipping post and lashed. It’s not as harrowing a scene this time, but it’s just as artistic. In another sequence, Jack leaves a small rally at a dilapidated section of the ward, and the camera remains fixed on his black chauffeur as he and his campaign manager Siobhan (Molly Kunz) argue over whether or not she’s slept with a black man. Putting aside the racist overtones leftover from his father’s upbringing, the beauty of the shot is that the conversation lasts for about a minute before the car pulls up at Jack’s palatial mansion. He’s in the same ward as the poor minority communities he campaigns for, but it only takes a minute’s drive and a few street turns to completely remove him from his constituents.

Reflection and observation are major themes in the film. Sequences like the chauffeur ride are more subtle than some of the others, including several well-blocked shots with mirrors, and comparative flashbacks Veronica has, both to her married life, and to the circumstances surrounding her son, Marcus (Josiah Sheffie). Veronica herself is a visual metaphor in this regard, a black woman in a luxury apartment where everything is a clinical, sterilized white, including her wardrobe and the dog. Several scenes are framed from a third person perspective with someone (usually Jatemme) stalking from behind a window. Even the final heist is something of a reflection of the opening heist, with similar chases and injuries.

Aside from the artistic elements, the action sequences are very well executed, and the plot twists, while guessable, are not outright obvious and predictable. This is a welcome change from a lot of recent films, where the outcomes are telegraphed from a mile away and we only hope the execution is good enough for us to forgive it.

There are two major flaws to be had for me. One is Belle. The character is fine, and Cynthia Erivo’s performance is very well done. I just don’t think she was necessary. Given what we find out about Amanda throughout the course of the film, I think it might have been better to include her in the final plan, just to see where loyalties truly lie. Also, given that Erivo is in all of the promotional material (including the image above), it’s somewhat confusing to explain that she’s not one of the titular widows, but rather a replacement for Carrie Coon.

Second, there are a lot of interconnected parts in this film, and a lot of references to race and socioeconomic class, which is perfectly good material. Everything from disenfranchisement to police brutality gets a bit of the spotlight in this film. My concern is that there is such a thing as too much of a good thing. There were moments where connections and coincidence and convenience had me worried that this might devolve into Paul Haggis Crash territory. Thankfully it didn’t get THAT heavy handed, but we came dangerously close a couple of times.

Still, this is a highly competent thriller, with some legit suspense and some brilliant performances. McQueen’s cinematic eye is as good as ever, and with a suspense master like Gillian Flynn at his side, you knew the writing was going to be top notch. But most importantly, the women at the center of this story had an actual reason to attempt a dangerous heist. There was a purpose, and despite the line used in all the marketing (“No one thinks we have the balls to pull this off!”), the narrative and the character development is so well constructed that it could have been anybody performing this heist and it would have been just as satisfying, rather than just having women for the sake of having women and pretending it counts as originality. So once and for all, may the “Ocean’s” be swallowed by the depths. Long live the Widows!

Join the conversation in the comments below! What film should I review next? What are some of the best crime movies you’ve seen lately? How can Daniel Kaluuya’s eyes convey terror so well? Let me know!