A little over a decade ago, director Danny Boyle struck Oscar gold with Slumdog Millionaire, winning Best Picture and Best Director among its eight victories. The film also made Dev Patel into a star, turning him into arguably the most famous actor of Indian descent on the planet.

Can lightning strike twice? Can Boyle turn another promising Indian actor into an A-lister with a charming modern fantasy? With this weekend’s release of Yesterday, I can say with confidence that the answer is a resounding yes. This film may not have the prestige appeal of Slumdog, and it’s decidedly not as good, thanks to some muddied satire and the utter nonsensical nature of the central conceit. But that doesn’t stop the film from being thoroughly entertaining, carried by two very charismatic leads.

In his feature film debut, EastEnders actor Himesh Patel stars as Jack Malik, a small-time singer-songwriter in Suffolk, England. He left a career as a schoolteacher when his childhood friend Ellie (Lily James from Baby Driver) took it upon herself to be his manager, booking whatever small gigs she could get him. Jack is a talented musician, but simply can’t make it big, and despite Ellie’s unceasing encouragement, he’s ready to throw in the towel.

While riding his bike home from his latest disappointment (a tent gig at a music festival that attracted a crowd of about 12), something somewhere causes a momentary worldwide blackout, at which point Jack gets hit by a bus. After he recovers, his friends buy him a new guitar. He thanks them by performing the title song, one of the many #1 hits of The Beatles.

The problem is, for some reason, none of them have ever heard of The Beatles. After frantic googling, it turns out that Jack is seemingly the only person left on Earth who knows the music of the greatest band of all time. After he performs a few more classics, he gets the chance to finally record an album, and a video of him goes viral enough to grab the attention of current pop sensation Ed Sheeran. Before you know it, Jack is touring around the world and getting signed by a major label, represented by the epitome of toxic capitalism, Debra Hammer, played by Kate McKinnon.

There are decent amounts of humor throughout, and Himesh Patel is a very talented singer. His adaptation of The Beatles catalog is utterly delightful, particularly his rendition of “Help!” which he turns into a Green Day-style pop-punk bit of cry therapy. He plays Jack with a measured approach of forlorn desperation and genuine ethical conflict. There’s a truly believable moral quandary for Jack as he gains the fame he always dreamed of by pretending he wrote the greatest songs in rock and roll history. It’s even harder for him to cope as he quickly becomes entangled in the shallow, callous for-profit world of today’s manufactured pop scene.

Honestly, the only thing about Jack that I didn’t buy for one second was that he could be so oblivious to not know how Ellie feels about him. She practically throws herself at him for the entire movie. She’s so hopelessly devoted to him that Olivia Newton-John traveled through time to draw inspiration for a song. And for God’s sake, it’s Lily fucking James! I mean, I’m pretty stupid when it comes to women, but even I’d be able to tell if she were sending those signals to me. On the way home from the theatre, my own girlfriend told me, “If Lily James ever comes on to you like that, you have my permission to go for it.” I irrationally love her.

As for James herself, her performance is equally as charming as Patel’s. She’s more than just a one-note girl next door love interest. She has her own life, her own ambitions, and she has her own happiness in the smallness of her world. Ellie loves Jack, and she loves supporting his talent, but she also loves being a teacher, and would never dream of leaving it behind when Jack becomes famous. Similar to Ali Wong’s lifelong crush on Randall Park in Always By My Maybe, Ellie harbors an unfathomably unrequited love for Jack, but she can also find satisfaction in just being a confident adult hanging out with friends and calling for Jack to sing his original “Summer Song.” While the “will-they-won’t-they” part of their dynamic doesn’t really work, there is a good deal of chemistry between the two leads, and you really do root for them to eventually figure their shit out. 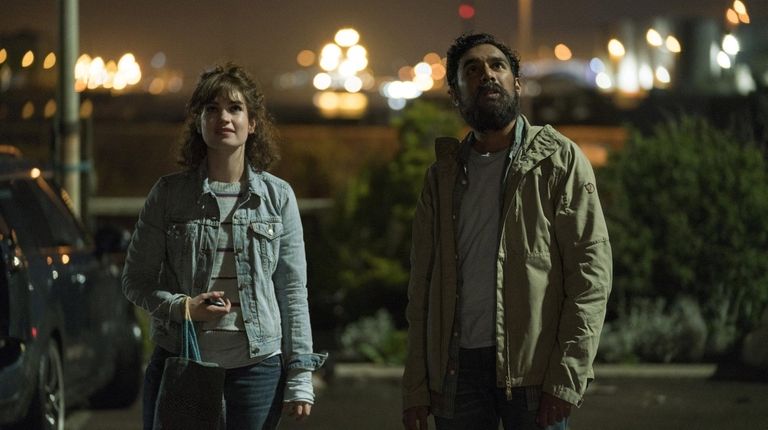 Where the film falls apart a bit is two-fold. First and foremost is the inciting incident of the power outage that erases The Beatles from existence. It becomes a running gag throughout the film as Jack learns about other things that are no longer real. Sometimes it works, like in finding out that the band Oasis isn’t a thing. That makes sense, as Liam Gallagher once said he thought of himself as the reincarnation of John Lennon. The Beatles were a tremendous influence on him and all of Oasis. You can’t have one without the other.

In those rare cases, the bit works. In other, more cringeworthy moments, the gag is used in the worst possible ways. For example, Coca-Cola no longer exists. How the hell does that work? Coke first came out in 1886. Are we saying that an electrical surge in 2019 can wipe out 130 years of history, all for the sake of Pepsi product placement? This is like the nadir of the old Saturday Night Live diner sketch. “NO COKE! PEPSI!”

The whole alternate universe where The Beatles don’t exist but Ed Sheeran and Justin Bieber do is just too weird – never mind that this is most decidedly a universe I DON’T want to live in. Things disappeared from this world at random, with no explanation as to how it could have happened. There’s a moment where Jack dreams about being confronted on James Corden’s show by Paul McCartney and Ringo Starr and proven a fraud, only to wake up back in this same new world. One of the great shock moments of the film nearly brought me to tears when I saw it, but after scrutinizing it for about two minutes, I found myself regretting how easily I was swindled emotionally.

The second major flaw is in the supposed satire of the modern music industry. Kate McKinnon as Debra Hammer (which is WAY too close to my mother’s name – literally only two letters off) is just an abhorrent, one-dimensional character. She’s greed incarnate, only interested in Jack because of the potential cash cow he could become. She constantly mocks him to his face, calls his original songs crap that she utterly hates (even though they’re tonally and structurally very similar to something George Harrison would write), and she’s only threatened by the possibility of not being able to exploit a musician. I normally love Kate McKinnon. She’s one of the funniest people alive. Here, I just hated her character from start to finish, and not in the “love to hate” kind of way. I just fucking hated her.

The problem with her as an avatar to mock the music industry is the fact that a) it’s not like Ed Sheeran, whom she also represents, is a paragon of independent musical artistry (his suggestion to change “Hey Jude” to “Hey Dude” is presented ironically, but it really is the sort of thing he’d come up with), and b) if someone like Jack were to come out with these songs for real, he’d never go anywhere in modern music. There’s a scene where a massive marketing team congratulates Jack for doing this music all by himself, without 16 songwriters and producers having their say, but that is what modern pop music is, from Beyoncé to Ariana Grande and everything in between. There’s almost no artistry anymore, and when someone actually does write and perform their own music – like Beck for example – they’re only given token attention until Ryan Seacrest et al find their next commodity. Love it or hate it, that’s just the way it is.

I think in some other alternate universe, there’s a much better version of this movie where some outside force – like a worldwide power surge – simply purges the memory of The Beatles from the masses, save for a few like Jack. It then becomes his destiny, his journey, along with Ellie, to reintroduce the Fab Four to the world and truly celebrate this wonderful music, to appreciate it the way it’s meant to. I think in this case, though, Danny Boyle just got a little too caught up in the world-building and absurdity of the concept to go for something that could stand up to critical thought.

That said, I can’t deny that I felt good the entire way through. I loved Himesh Patel and Lily James (as well as Joel Fry in a strong comic relief supporting role as Jack’s stoner roadie), and of course, just the existence of this music in film is enough to elevate the proceedings by a few letter grades. There have been really creative Beatles catalog films like Across the Universe, and there have been really bad ones that can only be enjoyed because of camp value, like Sgt. Pepper’s Lonely Hearts Club Band. So simply by virtue of the music itself, I’d recommend seeing it. Even the worst movie imaginable becomes a special experience when you can sing “Hey Jude” over the closing credits.

Join the conversation in the comments below! What film should I review next? What’s your favorite Beatles song? Did you know there’s a member of the crew named George Harrison? I mean, it has to be a law to hire a guy with that name for a movie like this, right? Let me know!