The internet is a double-edged sword in many respects. For my purposes here, it is both essential, because it provides me a platform for talking about my favorite thing in the world (movies), and annoying, because part of the fun of Oscar season is seeing all the films and rating/prognosticating about the awards themselves. The latter part compounds itself year after year, as the various awards ceremonies for critics’ associations, labor guilds, and different countries entirely, pretty much tell you who’s going to win about half of the categories come Oscar Night. At that point, the only real suspense is in seeing what few truly in play categories come up.

Tonight, unfortunately, is not one of those categories. Pretty much all four acting awards have been claimed, and of those four, this is the one I’m most certain of. We’re almost guaranteed to see a “Career Achievement” Oscar handed out in two weeks to one William Bradley Pitt the culmination of a stellar acting career to date, and one that should have been honored half a dozen times by now. In fact, he actually already has an Oscar, just not as an actor. As a Producer, he took home a win a few years ago when 12 Years a Slave won Best Picture. In fact, his last three Academy nods have been as a Producer (The Big Short and Moneyball, where he also got a Best Actor nomination), and his inclusion and almost assured win for Supporting Actor breaks the 3-3 tie in his overall recognition to date.

But even so, how does Brad stack up against the field he will be presumably beating on Oscar Night? As is usually the sad case, both Best Actor and Best Supporting Actor had incredibly deep fields of candidates from which to choose, whereas the Actress slates are much more scant when it comes to standout performances… at least as dictated by the mainstream movie-going public and press. I wish that wasn’t the case, as both men and women do terrific work year-round, and it shouldn’t be so hard to find quality regardless of Y-chromosome count. Still, those who read my “Best of 2019” blog will know that I would personally have only nominated two men in this field, with three other completely valid entries making my shortlist, and even more that I could pick along the way. So how do we rate the five that the Acting Branch of the Academy settled on? Let’s get to it.

This year’s nominees for Best Supporting Actor are:

Tom Hanks – A Beautiful Day in the Neighborhood The last 36 hours have been somewhat surreal here in Los Angeles with the death of Kobe Bryant, an undisputed master of basketball, and easily one of the 10 best players in the history of the game. He also had a very checkered past, where he at minimum cheated on his wife, and quite possibly committed sexual assault in the process. He moved beyond the scandal to cement his place in NBA history, and even won himself an Oscar to boot two years ago.

I bring this up because one of the best parts of Tom Hanks’ performance as Fred Rogers is the all-too brief, but still essential, acknowledgment that while the Mr. Rogers we saw on TV was the genuine article, he too had his demons (though obviously not anywhere near Kobe’s level of controversy). Hinted at with exposition and dialogue, it’s comforting to know that even Mr. Rogers had his share of regrets, doubts, and insecurities, and that he was not immune to cynicism. He still represented the best of humanity, and it made perfect sense for Tom Hanks – the most purely good person Hollywood has – to play him. But in an odd way it was even more comforting than normal to see a version of Mr. Rogers that was truly vulnerable. And it takes an actor not just of Hanks’ caliber, but also of his grace, to pull it off. The day will come when Mr. Hanks will also shuffle off this mortal coil, and for me (and I’m guessing a whole lot of others), it will be just as sad as when we lost Mr. Rogers.

I do not hold The Two Popes in as high esteem as the Academy does, mostly because the entire film can be reasonably reduced to “Two British Actors Wear Robes and Speak in Non-British Accents.” But of the two lead performances – because it really is foolhardy to call Jonathan Pryce the lead and Hopkins the support when they essentially shared equal screen time – I think I preferred Hopkins just a bit more.

Part of this is the fact that he had the harder role to play. Between the last two pontiffs, Francis is the much more likable and relatable one, which means it’s easier for Pryce to make us root him. Benedict XVI, however, is a whole other ball of wax. He’s potentially the last remnant of the Church’s true “conservative” branch (and for Catholics, that is saying something), he still openly criticizes Francis even as an emeritus, and he still carries a lot of baggage from his brief time as the Holy Father. Between his formative days in the Hitler Youth (I believe he was forced to join, so I don’t hold it against him, but your mileage may vary), the Church’s ongoing sexual abuse scandal, and the somewhat mysterious circumstances surrounding his retirement, Ratzinger was the first modern Pope to basically admit that he was fallible. And while Hopkins’ portrayal is combative and condescending at points (by design of Anthony McCarten’s script), there is that slight nuance to the performance that can’t be entirely ignored. 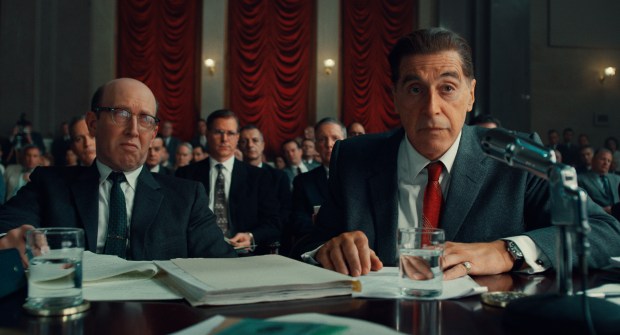 If you were ever to ask me who I’d want to see play Jimmy Hoffa in a movie – and I’ve already seen Jack Nicholson do it to great effect – I’d say Al Pacino. While his last several roles have been decidedly hit and miss, this time he nails it unquestionably, and he does so by virtue of the same skill that carried a lot of the performances in The Irishman, namely nostalgia.

This is Pacino’s best performance since he won the Oscar for Scent of a Woman, and it’s because he leans in to his own past to play Hoffa as a combination of two of his greatest roles. Throughout the film, he plays the (presumably) late Teamsters head with the passion and raw disregard for criticism of Frank Slade, but with the subtle genius and political maneuverability of Michael Corleone. He gives less than two shits what anyone thinks of him, because he’s in power, and because for most of the film he holds all the cards. But at the same time, he’s worldly and self-aware, always one step ahead of everyone trying to take him down (until the one time he fatally isn’t), because he knows how people think and how they act.

If you’re going to go back to the well, this is the way to do it.

It’s a shame that Pesci and Pacino are nominated together, because any chance of an upset against Pitt goes completely up in smoke with the two of them on the same slate, assuring a split of the pro-Irishman vote. That said, of the two, I am decidedly on Pesci’s side.

The man basically came out of retirement to do this role, as this is only his fifth film in the last 20 years. And what a way to come back! This is the most subtle, subdued performance I’ve ever seen him give. This is a man who made his bones throughout the 80s and 90s by playing extremely over-the-top roles, be it in comedy (the Home Alone movies), crime films (Goodfellas), or an oddly compelling combination of the two (My Cousin Vinnie). But here, he’s measured, he’s composed, he never flies off any handle. In fact, his character is the most zen of any in the film, even when he’s ordering people executed. He plays a man who holds no illusions about who he is or what he does, similar to Paul Newman’s character in Road to Perdition, only he makes a separation between his ghastly work and his personal life, trying to be legitimately friendly and warm to those on his good side. It’s the most human role he’s ever done.

Brad Pitt – Once Upon a Time… In Hollywood 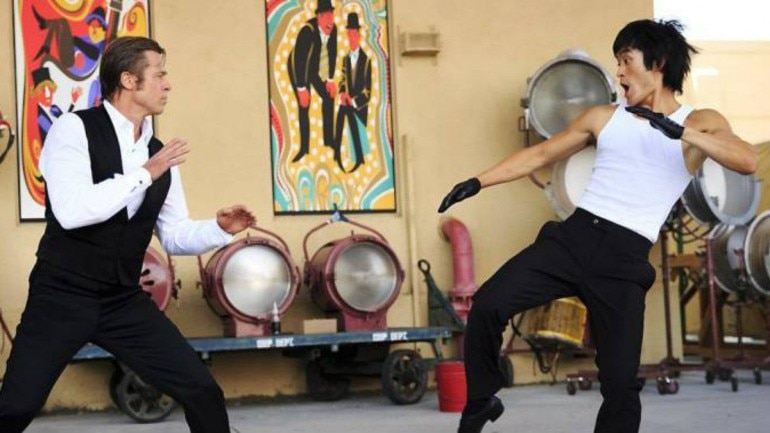 He’s going to win. There’s basically no question about it. But is he the best? Honestly? Yes.

From the very first moments of the film, when he’s established as Rick Dalton’s stunt double, Cliff Booth is always perfectly in a supporting role. As he and Dalton are being interviewed, he gets the first great joke of the film by wryly laughing at the innuendo that he “handles [Rick’s] load.” When we advance to the late 60s, he’s Dalton’s chauffeur, personal security, handyman, and of course, companion and confidante. He never takes any slice of the pie for himself, only does what he can to be useful.

He also gets the honor of being Quentin Tarantino’s wild card character for the movie. Every QT film has one, be it Samuel L. Jackson in Jackie Brown, Darryl Hannah in Kill Bill, or Pitt’s other half, Leonardo DiCaprio in Django Unchained. Every Tarantino film has a character that you just can’t predict, and usually that results in some first rate ultraviolence. Pitt doesn’t disappoint here, as he is the high-as-a-kite centerpiece of the film’s gory climax. Possessing an accidentally violent side that is only hinted at in a couple of asides and flashbacks early on, when the moment finally comes, he dishes out the punishment in the most delicious ways imaginable, to the point that everyone in The Irishman would probably go, “Hey, ease up a bit!”

It’s very much to Pitt’s credit that he gives hints throughout to his nature, letting us know in little fits and spurts what simmers beneath the surface. As DiCaprio’s Dalton grows wistful, and even a bit whiny about his career trajectory, Cliff is out there busting his ass for little to no salary or appreciation, and yet everyone gives him shit. At some point, the shoe has to go on the other foot. That’s what we see at the Manson compound after a member of the “family” makes the mistake of slashing his tires, and it’s definitely what we see when the trio of assassins shows up to the wrong house. The comedic glee with which he doles out karma is an essential element of the enjoyment of Tarantino’s leitmotif of revisionist history, and few could pull it off better than Pitt. The man is due for his acting Oscar, and it won’t be a token. He fucking earned it.

Join the conversation in the comments below! Which performance did you like best? Do you think Pitt deserves this win? Can you think of a way to prevent the interwebs from spoiling the results via the awards circuit undercard? Let me know!